ESCO ELIOS Ltd. was established with the aim of taking one of the leading positions in the reconstruction of public lighting according to the ESCO model in Serbia. We have been present in the market since 2014 working on the development and implementation of public-private partnership projects in the field of reconstruction and maintenance of public lighting. The company's management consists of experts who have gained many years of experience in the field of ESCO model application in public lighting, working on similar jobs in the country and abroad. The acquired knowledge is directed at developing projects on the basis of the Public-Private Partnership and Concessions Law, while taking care to entrust all the tasks of execution and maintenance to domestic companies.

The main activity of our company is public lighting reconstruction of local self-governments in Serbia using efficient and high-quality LED lamps through the ESCO model (Energy Saving Company).

Public-private partnership projects require complex expertise. Our company, with a developed network of business partners and associates, is able to realize these projects on a turn-key basis. As an ESCO company, our goal is to contribute with quality projects to a number of business solutions that increase the energy efficiency of local governments and to show all the benefits that the ESCO model provides.

The ESCO model implies a financial and technical solution by which the ESCO companies pre-finance the preparation and implementation of projects (investing their own resources, knowledge and experience), and customers pay this added value in the form of reimbursement from realized savings.

Savings in the field of public lighting reconstruction consist of two elements:

- saving in electricity and

The ESCO model enhances cooperation between the private and public sector in the field of energy efficiency, where a private partner takes risks and provides financial and technical solutions for projects. ESCO companies do not work alone, they have a team, their task is to be integrators. 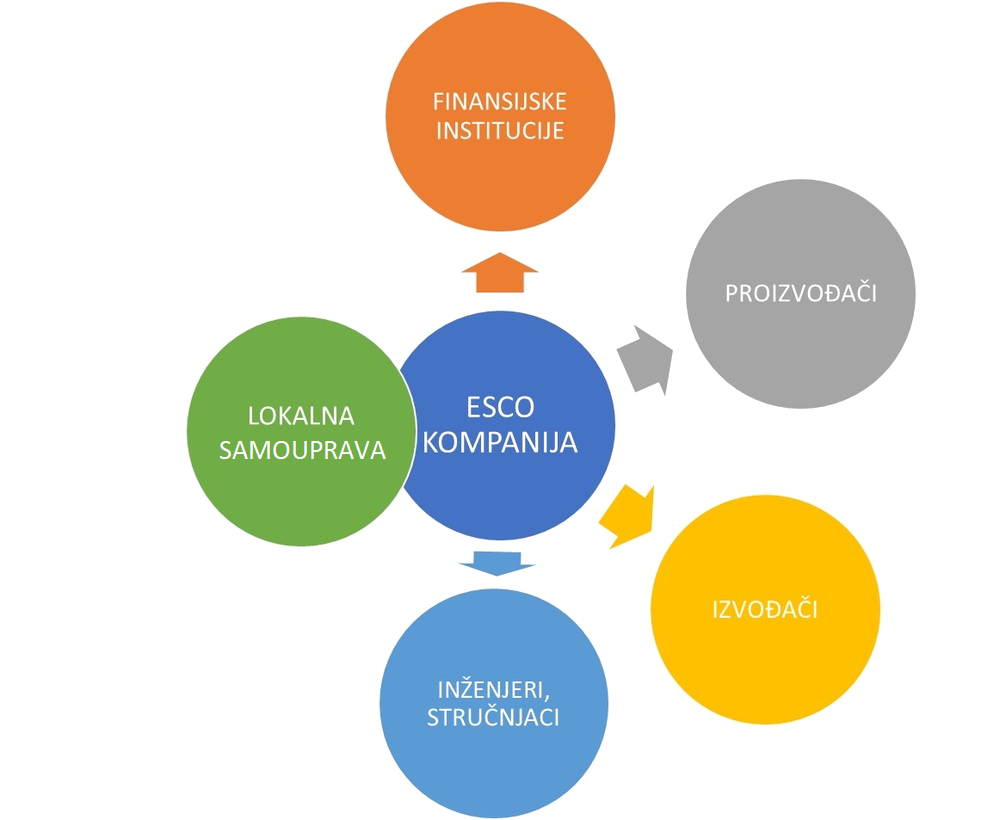 The public-private partnership is an instrument of the ESCO model by means of which, through the investment and replacement of obsolete LEDs, new LEDs reduce the current expenditures of local governments withoutgoing into debts. These are long-term contracts, in which in the initial period most of the savings are directed to the repayment of the investment and to a high level quality of maintenance. During the warranty period, any increase in electricity prices and other charges per account will mean greater savings for local governments. The public-private partnership also represents an economic need of the state to establish partnerships with investors instead of borrowing relationship.

Benefits of the ESCO model:

• There is no credit indebtedness and engagement of clients funds.

• A predictable model that provides a long-term expenditure planning.

• Guarantees the expected savings and the payments are made from the savings realized.

• The private partner is responsible for both financial and technical risks.

• The private partner is in charge of maintaining the implemented system throughout the guarantee period, and is therefore motivated to build the highest quality system.

• The model supported by the Government of the Republic of Serbia.

The sphere of public-private partnerships in Serbia is regulated by the Law on Public-Private Partnership and Concessions, which enabled the Government, the Autonomous Province and the local self-government units to decide on initiating the procedure for the implementation of the PPP project. The procedure of selecting a private partner is based on the Law on Public Procurement.

The need for public-private partnership projects lies in the following:

• existing lamps are obsolete and cause high maintenance costs,

• the expenditures per account for electric energy tend to grow

• Energy saving - due to the high efficiency in converting electricity into light, LED lights are the best choice for replacing old, less efficient luminaires with mercury and sodium light sources.

• System security - high quality LED lights are less prone to malfunctions than other types of luminaires. By joining the PPP project, the Municipality receives a completely new, secure and stable system, which, according to consumers, means that 98% of the luminaires will work at all times because the Private Partner is obligated to maintain lighting.

• The real goal - the old mercury bulbs, as it is seen in the name, contain mercury. The production of such lamps in the European Union is prohibited and can not be purchased. In the coming years in the territory of Serbia, the luminaries should be replaced, not only because of the cessation of production, but also because of the fulfillment of the ecological standards and requirements set by the European Union.